What would rugby look like if Packer had won in 1995?

Talking to Martin Bayfield for the latest Unofficial Partner podcast was always going to be a laugh. That’s why we wanted him on.

But the bit that has stayed with me from our conversation was when we talk about the 1995 World Cup.

Bayfield was in the England squad in South Africa, which is when rugby was very nearly split wide open by Kerry Packer, who wanted to do to rugby what he’d done to cricket in the late 1970s. Packer wanted, to borrow a now fashionable term, disrupt the shit out of it.

Rugby players played in front of tens of thousands of people and millions on TV, but didn’t make a dime. Hear Bayfield talk about the conversations among the players, and still has the contract he was offered in 1995, somewhere at home in a filing cabinet, unsigned.

The conversation made me want to go back and look at this photograph again. 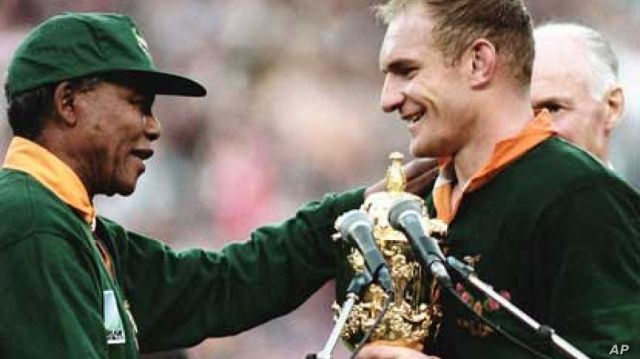 Francois Pienaar of South Africa receives the William Webb Ellis Trophy from Nelson Mandela in front of 63,000 people at Ellis Park in Johannesburg. The Springboks have won a grinding, attritional final against the much-fancied All Blacks to win the third IRB Rugby World Cup, just three years after the country’s re-inclusion in to the international game. Mandela, the hero of the anti-apartheid era and of black South Africa, is wearing the dark green of the Springboks, a symbol of white supremiscist rule. It’s a marketing man’s dream: The World In Union, such a powerful narrative that Clint Eastwood made a film about it.

But this is the official version of rugby history. And like all histories, it has been written by the winners: the official governing body, the IRB, and by extension, the Unions of Ireland, England, Scotland, Wales, France, Australia, New Zealand and South Africa.

It could have been very different.

In 1995, as that photo was taken, the IRB was fighting a battle for its own survival and one of the chief architects of the revolt was the man at the centre of the picture, Francois Pienaar.

Behind the scenes, the Springbok captain was acting as a recruiting sergeant for Kerry Packer, the Australian media mogul who was intent on doing for the then still amateur game of rugby union what he had done for cricket nearly two decades before. Packer’s World Rugby Corporation (WRC) had spent the ’95 World Cup signing up players to break away from the official ranks and join his gang. This process was not difficult, given the amateur status of the players and the size of Packer’s cheque book – like ‘shooting fish in a barrel’ was how the job of signing up disgruntled rugby players was later described.

"We are in a wild west situation with a lot of cowboys in town," said Edward Griffiths, chief executive of Sarfu, the South African union, which faced the threat of a mass player exodus, either to Packer’s breakaway or Rupert Murdoch’s Super League. The official boards responded with cash and threats, which came to a head in a hotel room in Sun City.

Pienaar, on a £180,000 promise from Packer, had persuaded 25 of the 28 Springbok squad to go to Packer. But they were faced down by the intimidating figure of Luis Luyt, the Sarfu president, who persuaded the players that their futures lay in the official game.

This was the point where the rebels were defeated, and effectively marked the moment when rugby turned pro, a fact recognised officially by the IRB in August of that year.

Today the IRB’s place at the heart of the game is relatively secure, as long as it keeps the money coming in. To this end the Rugby World Cup is the game’s cash cow, the value of which was revealed in those harem scarem days of 1995.

Behind closed doors, Luyt offered the would-be rebel Springboks a hike in pay. But he also employed another lever: history, and what the advertising industry likes to call the authentic experience.

Rugby players in every country grow up wanting to play in THAT shirt, in THAT tournament and for THAT trophy, all of which are the intellectual property of the official unions, the same IP that has proved so alluring to fans, sponsors and TV.

But the lesson of 1995 is that however permanent a regime seems on the surface, things change, and quickly. It’s this thought that keeps sports new generation of well paid administrators up at night. The international calendar is looking full and future growth may come from the club game. Back then it was Kerry Packer talking revolution, today it’s CVC, Infront. Same game, different players.

GoalGiving! Back your team, and changes lives....